Graycliff Cigar Company produced the original Family Series, out of the historic Graycliff Inn in Nassau, The Bahamas—though production stopped several years ago, largely due to the high taxes incurred from importing tobacco into The Bahamas.

While the company's arrangement with Graycliff came to a close, it had begun developing a relationship with yet another prolific boutique cigar factory—El Titan de Bronze, who is producing the re-blended line in Little Havana, Miami. 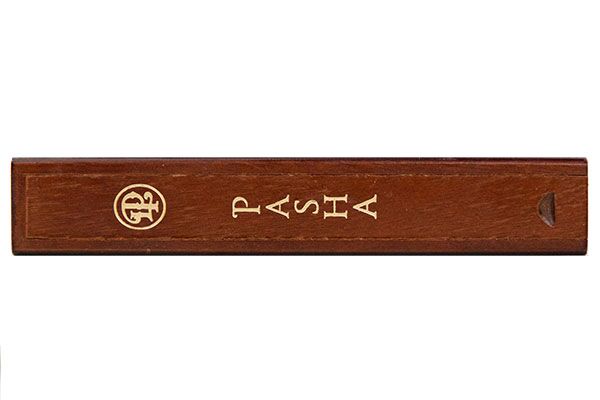 Now formally called Family Series Miami, La Palina owner Bill Paley initially declined to disclose details regarding the blend, though he has apparently changed his mind as details are now readily available on La Palina's website. They are an Ecuadorian Corojo 98 wrapper, an Ecuadorian Habano binder and Nicaraguan fillers.

The Family Series Miami is offered in three sizes, each named after important family members: Babe after Bill's mother, Allison after his wife, and Pasha after his father. Their dimensions are 5 1/4 x 50, 6 x 52 and 7 x 50, respectively.

All three sizes are offered in 10ct boxes, though the Pasha is also available in massive boxes of 20 with each cigar individually wrapped in cedar and coffined. 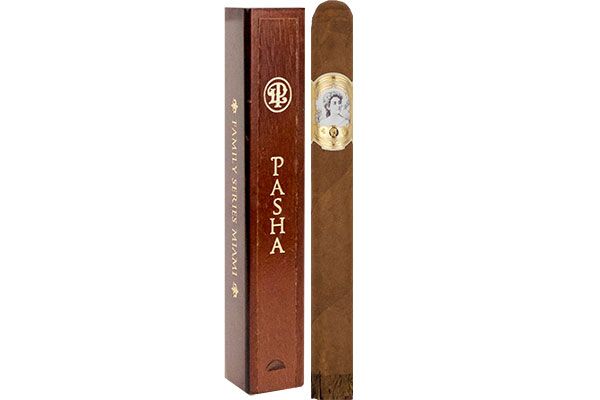 As mentioned, you can purchase La Palina Pasha in two variants, and both are equally beautiful, which makes sense given they're the same cigar minus packaging. The cigar in the coffin is wrapped in cedar and has a single band, whereas the non-coffined version lacks both, but adds a secondary black and gold band that reads "FAMILY SERIES MIAMI."

The wrapper is equally pretty. It's a glowing sandy brown that's silky smooth, top to bottom, though it is finely toothed as well. And tying it altogether, the Miami-made Pasha shares the same shaggy found on the original.

Aromatically, Pasha exhibits a mixture of damp oak, almonds and some sort of mixed sweetness that I'd describe as the 'tang' of an apricot, and the richness of a plum—though it doesn't have any of the tart citrus that you sometimes find in the latter.

The dry-draw is essentially a sexed-up version of what you pick up from the foot, albeit with a bit more crisp to the wood flavors, and a bit of leather in the finish. 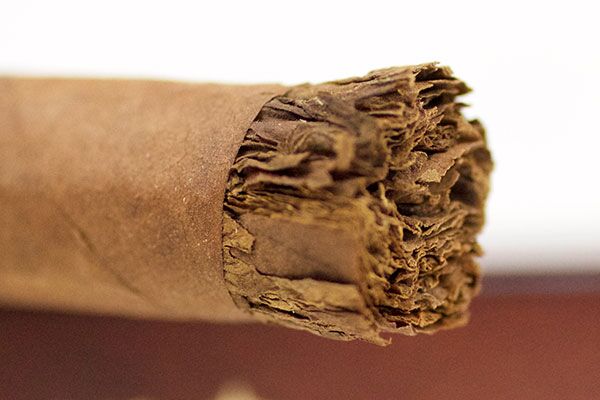 The Pasha starts the same way it appears visually—silky smooth. There's a real creamy, almost powdery texture that settles itself right in the center of the tongue and slowly spreads across the entirety of your palate.

This far into it, it's difficult to describe. There's a few different flavors—almond butter, walnuts, and what is arguably the softest display of white pepper I've ever encountered—but every note is just so incredibly soft, delicate and understated that it's hard to really pinpoint what's actually there.

Through the nose, a smooth floral flavor is picked up, though it's hard to consider it a note, so much as a subtle floral coloration of everything else. Strength, body and flavor hover around the medium mark, though I wouldn't be surprised if some perceive this as mild. 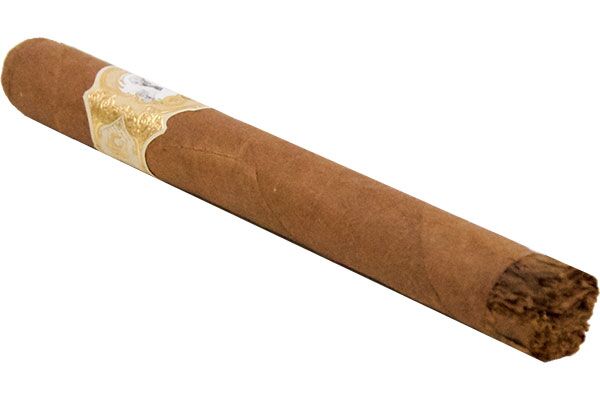 Progressing into the second third, La Palina's new Pasha has slowly become more potent all around. Not by much, but enough that the various notes and undertones are more perceptible.

There's a bit less creaminess than earlier on, and much heartier presence of wood and nuts. The same almond butter remains, and a spicy nutmeg has emerged alongside it. Additionally, there's a set of flavors that's tempting to blanket with the term woodiness, but with a bit of attention it becomes a discernible mixture of oak and cedar.

Underneath a mild leather undertone pervades, though it's more perceptible on a retrohale. Strength still doesn't strike me as anything more than medium, but body and flavor are both up a considerable bit. 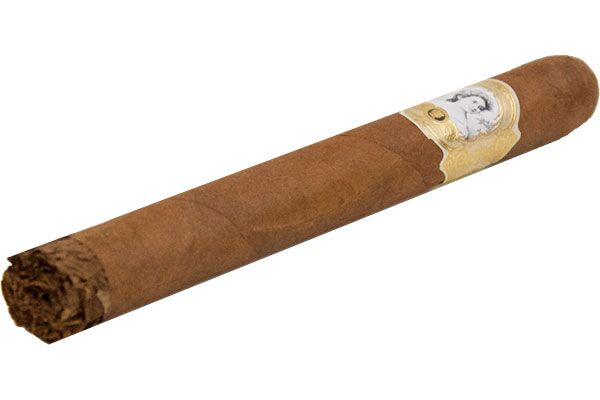 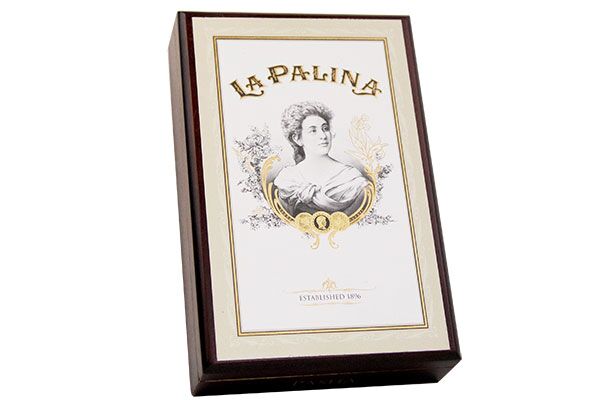 This could really be considered the second half of the second third, or maybe a third quarter if you prefer. At almost exactly 50% mark, La Palina Pasha goes through a rapid transition into something much more...enlivened.

It doesn't come across as unplanned—quite the opposite, actually. The transition is bold enough to grab your attention, but the Pasha never once gives even a hint losing its poise.

There isn't a whole lot in terms of new flavors, other than some sort of brown sugar/sugar cookie mixture developing, but there is a heftier helping of every note that is present. Once again, it's difficult to really articulate, but the creamy sweet notes have resigned their role as the dominant flavors, shifting the emphasis to the more earthy-barnyard flavor set.

Nearing the end, a general toasted flavor coats everything, along with a stronger presence of leather. I wouldn't say anything was missing prior, but the toasted flavor really does add something quite enjoyable. Strength, body and flavor peak at medium+. 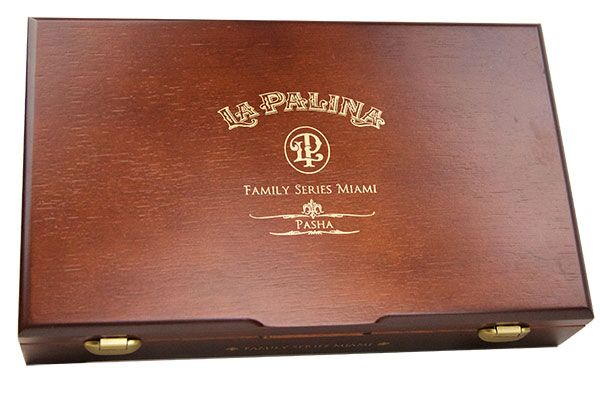 This was, without a doubt, one of the most difficult cigars to describe I've ever written about. It's good, real good. Exceptional even. But trying to articulate what exactly it is about it that is so good proved to be incredibly difficult.

I can, however, tell you some of the broad characteristics that elevate La Palina's Family Series Miami Pasha to an exceptional level.

As I've said a few times in previous reviews, the separation between good and great cigars is that good cigars have good flavors, whereas great cigars have great flavors that go well together. The truly exceptional cigars have fantastic flavors that function together in a way that they bring out the best in each other, and creates an experience that is entirely unique to that cigar.

I've been fortunate enough to smoke a lot of great cigars, and have fond memories of a number of them enjoyed with friends and family. The truly exceptional cigars though—they create their own memories, and they're all-encompassing, regardless of set and setting.

On the company's website, they describe the cigar as "perfectly blended, expertly crafted and handsomely present, the La Palina Family Series Miami is an exceptional expression of the Paley legacy."

I'm not a fan of marketing lines, but in this case, I'll give it to them.

If you'd like to give the La Palina Family Series Miami Pasha a try for yourself, you can pick them up here.