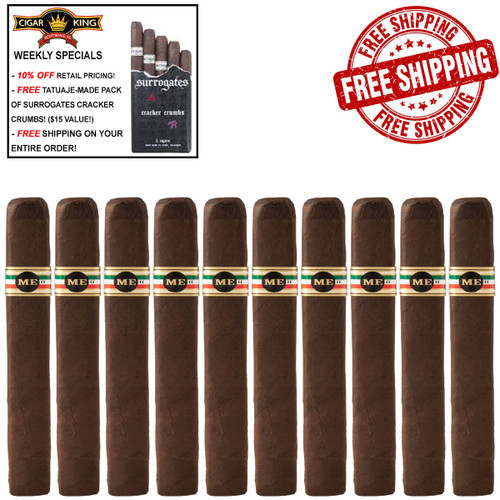 THE EXPERIMENT IS BACK: While our original allotment of Tatuaje “Mexican Experiment II” sold out, we’re pleased to announce we just received additional stock! Get a bite-sized 10-Pack for yourself and enjoy 10% OFF Retail Pricing, PLUS a free 5-Pack of Tatuaje-made Surrogates Cracker Crumbs, PLUS Free Shipping On Your Entire Order!

The Mexican Experiment originally debuted in 2011 as a limited edition that was known as one of the best cigars Tatuaje had ever released. What made the blend so unique was the juicy, Mexican San Andres wrapper that Tatuaje Owner Pete Johnson decided to use on the blend. Before him, there were few companies who had ever utilized Mexican tobaccos in their cigars. But after Johnson had done it, many other blenders followed suit.

Late last year, Tatuaje made the exciting announcement that the blend was back for a limited production run, and now we’re excited to say we have them for sale at Cigar King! A Mexican San Andrés wrapper adorns classic Tatuaje Nicaraguan binders and fillers, making for a tasty core of chocolate, pepper, earth, and black coffee.