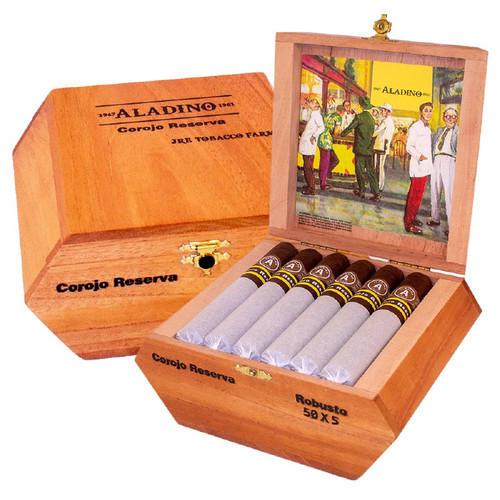 After the sale of the Camacho brand to Oettinger Davidoff Group in 2008, famed cigar maker Julio R. Eiroa took a brief leave of absence from the cigar world. What wasn’t included in the sale was Julio’s tobacco farm, the same fields from which Camacho cigars had been grown in (and made famous in!)

Years later, Julio partnered with his son, Justo Eiroa, and together they debuted a cigar that was quick to gain a cult following, the Aladino Corojo Reserva. This cigar has been likened to the original “Camacho Diploma” debuted in the 90’s, and is bar-none our favorite Honduran cigar currently offered on the cigar market.

Soon after you light the Aladino Corojo Reserva up, you’ll be delightedly met with an all-too-familiar (if you’re an old-school Camacho Fan) reunion of rich cedar flavors, black pepper, and even some slight notes of cuban espresso. Being a Honduran Puro wrapped from head to toe in 100% authentic Cuban-seed Jamastran Corojo tobaccos, you’ll taste pleasant graham cracker spices on the retrohale that are sure to captivate even the most seasoned of palates! As a whole, the Aladino Corojo Reserva is an incredible, box worthy cigar; and we think you’ll agree!